Last weekend was a big one: I ran my first race in 14+ months!

On Saturday, my husband and I made a trip up to Wayne, NJ, for the Penguin Pace, a new 5K course. I chose this race for a couple of reasons. First, the timing was right. I plan to begin training for the Grandma’s Marathon on February 12, so this race would allow me to set a baseline for my fitness before I started training. Second, I love penguins. My husband and I spent a night on a farm with an outhouse during our honeymoon to see penguins in their natural habitat, that’s how much I love penguins.

I had some reservations going into the race though. This was its first year as a certified 5K and it appeared to have some significant hills in the first mile. The first concern turned out not to be an issue, the race was extremely well organized and the right distance (always a plus). The second concern, however, was well founded. But more on that later.

When we got to Wayne, unfortunately the parking lot of the church where bib pick up would be was full. It was super cold out though (18 degrees, feels like 9), so I didn’t feel like walking form the alternative parking location about a third of a mile down the road. So Luke dropped me off and I went to pick up my bib, and then started on my two mile “warm” up (we were running a tad late).

During this warm up, I got a taste for the hills I would confront in the first mile of the race. Boy, where they a doozy. At that point, I knew I would have to be sure to keep myself in check for the first half mile, and make up for it on the downhill later.

The great thing about this race was that after I finished my warm up, I was able to go hang out inside the church. Inside, I quickly took off my warm up jacket and changed my shirt, as I didn’t want to be sweaty at the start, and pinned on my bib. By the time I was done with that, they were already ushering people out to the start.

Going into the race, I had a couple goals. My primary goal was to run this race faster than I ran my last 5K in November 2016. I ran that 5K in 19:58 with a calf strain (I was diagnosed just two weeks later). My second, secret goal was to place. This was a small race, so I was optimistic I could come in the top three. As such, I lined myself up at the front of the corral.

The race organizers were fantastic, and got us started after just about 5 minutes of standing outside, so we didn’t get too cold waiting for the start.

When the gun went off, I took off, but I let people get out in front of me since I knew the first hill would begin in just about a tenth of a mile. I put my head down and focused on remaining steady on the climb. At this point, I knew there were about four women in front of me, but I held back. By the time we neared the top of the first part of the climb, I passed one of them, and I could see I was gaining on the others.

When I reached the top of the hill, I let it all go and really opened up my stride and passed a number of people, including two women in short order. Heading toward the first mile marker, we ran through a quick out and back, and I saw they women I passed were about 30-50 yards back, so I knew I couldn’t let up. The clock read 6:25 at the mile.

The second mile, we turned a corner and started running along a lake. Fortunately, this mile was relatively flat. Unfortunately, it was into the wind. It’s amazing how much wind can impact you when running at 5K pace. At this point, I thought to myself, “Man, I forgot how much 5Ks suck.” I continued to pick off a few runners long this stretch. I hit the second mile at 12:49.

At this point, I knew that to go sub-20 I would have to hang on and not slow a second, even with another 50-foot climb in the final mile. At this point, there was about a 50 yard gap between me and the next person that was neither narrowing or widening, so I was along, just grinding it out. At 2.5 miles, we made our final turn.

Soon after, I looked over my shoulder to see if anyone was there and I saw someone in all black. I couldn’t tell if it was the kid in all black I passed around the 2-mile mark or one of the women in all black that I passed on the downhill in the first mile, but I just had a feeling it was the woman. I didn’t want to lose my lead with less than a half mile in the race when I had spent so much time running alone, so that helped motivate me to keep pushing.

With about a quarter of a mile left, the lead bike can back for me, confirming that I was in the lead. My thighs were lead, my lungs burning, but my calf felt good, and for that, I was so thankful. I pushed through and broke the tape (always a fun experience) in 19:53. It turns out I was right and the person behind me was another woman. She finished 14 seconds after me. 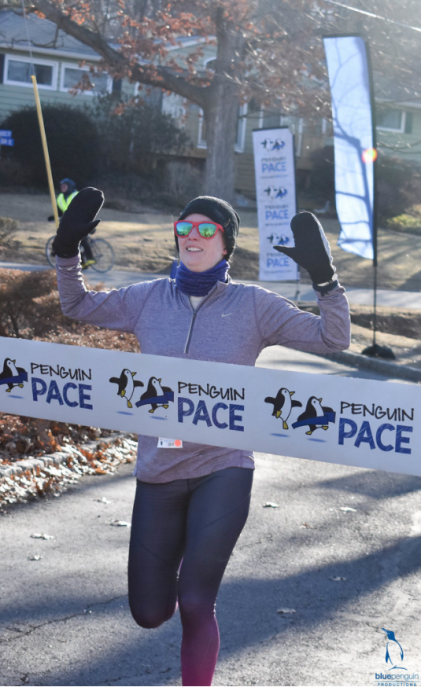 All in, I’m happy with the effort. I accomplished both my formal goal of beating 19:58 and my secret goal of placing with the 1st place finish. I would have liked to have finished further under 20 minutes, but with cold temperatures and a tough course, it is what it is.