Last week’s blizzard already seems like a distant memory at this point, but that didn’t prove to be true earlier in the week, when slush and ice and poorly plowed roads proved a little difficult.

But that couldn’t stop me from getting back to the grind after a down week, with two tough workouts, and a new weekly mileage peak to boot.

The week kicked off with a little bit more difficulty than most, since as of Monday, the roads were still a mess from Saturday’s blizzard. I had a medium long run on tap, and it ended up feeling like a 10 mile obstacle course with all the slush and ice. I ended up having to run in the middle of the street most of the time, so it’s a good thing I had my trusty Nike Flash Jacket to help keep me safe. (Protip: Look for one on eBay in the middle of August. I got mine for $115. Original retail: $400.)

With the roads still a mess on Tuesday, I decided it was best to forgo my typical morning workout in order to run in Central Park with my running team in the evening. It might surprise some people, but Central Park is usually the cleanest part of the city right after a snowstorm. The parks department is totally on it.

As such, Central Park was immaculate, which was a good thing, since I had 5 miles at half marathon pace on tap. Fast + ice don’t mix, but we were all clear here.

I’ve been struggling a lot with goal half marathon pace of late. I just seem to have trouble zeroing in on that pace, and if I can’t zero in on it, a run can go south pretty quickly, since going just a smidge too fast can put me past my lactic threshold.

After that hard effort, my Wednesday recovery was…less than ideal. I was plagued with side stitches, which is a problem I haven’t encountered in awhile. It took everything I had to just get through 5.5 miles.

I was back at it on Thursday, though (thankfully without any side stitches), with a marathon paced workout. Unfortunately, Snow melt + 28 degrees = Treadmill. If you follow this blog, you may have noticed I never mention the treadmill. That’s because it’s been a good 2+ years since I last ran on one (excepting last week’s Vo2Max test).

I hate these things. I think the treadmill is a torture device designed by Satan himself. Add in a gym that is WAY too warm, and I definitely felt like I was in hell on Thursday morning.

Marathon pace isn’t something that is supposed to make your heart rate go crazy, but those 56 mins at marathon pace on the treadmill left me with a higher max heart rate than any of my interval workouts of late. That’s saying something.

After that miserable experience, I took a much needed day off of running on Friday, just doing a barre class instead.

On Saturday, I got out there with my running team again for my long run — my first 20 miler of the training cycle! It’s amazing how running with others can make a 20 miler go by quickly.

I was quite happy with this effort, because it was my fastest 20 mile effort to date, averaging 7:33 min/mile. (Smashrun is a fantastic resource for noting these things.) I also, according to my fiance, looked like a purple zebra for this run. Perhaps that is just the magic of the purple zebra! 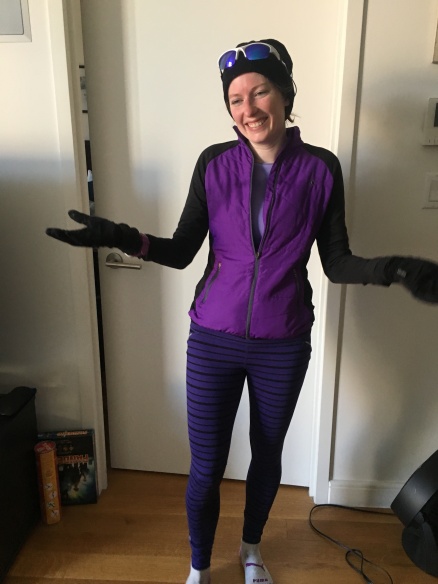 A significant mileage record. My prior peak was 57, which I hit during peak week of my last training cycle…and two weeks ago 🙂

How are you guys getting on with winter training? Anyone else hate the treadmill as much as I do??