Double digits?! How did we get here so fast?

This is the awkward point in training when you are really far in…but you still have so far to go. When you feel strong and confident…but also sluggish and tired.

I can tell my body is changing (and hopefully improving), that the miles I’m putting in aren’t for nothing, but I still don’t know if I’m ready – or able – to hit my goals.

I was ambitious when I first started training, but now that my first big test, the Staten Island Half Marathon, is just around the corner (less than two weeks!!), I don’t know if I’m ready.

And I’m afraid that if I don’t do well in the SI Half, it’s going to destroy my confidence for the Philadelphia Marathon.

What is my goal? Well, once upon a time it was to go <1:32, so that I could run the New York City Marathon without spending so much money on the NYRR 9+1 program (run nine of their races, volunteer at one).

Am I putting too much weight on this race? Probably. Can I lighten up? I don’t know.

Anyway, here is what my second-to-last hard week before Staten Island looked:

Tuesday’s workout was with my running team. It had been awhile since I had made it to a practice, so it was nice to get out into Central Park again. My group averaged 7:10 per mile (they were pushing it!) and I wasn’t going to back down. That was harder than most recent marathon-paced workouts, since it was in Central Park with all its hills (and I’m a wimp and typically avoid hills at all costs).

Thursday I had a good, but hard track workout that I grabbed from McMillan. He recommends running this one 2-4 weeks out from a goal race, and this workout was about 3.5 miles out from Staten Island!

I ran an easy 2 mi. warm up, and then hit the following times:

I followed that up with a 2 mi. cool down. I was wiped after that.

Things got interesting on Friday. I didn’t have a run scheduled (just barre class in the morning), but I decided to move my Sunday recovery run to Friday. I could use the recovery miles after the track workout, but also, I didn’t want to have to worry about running on Sunday as I would be up in Connecticut to celebrate my boyfriend’s grandmother’s 85th birthday.

I thought it would be the perfect day for a lunch run. It wasn’t too hot and with the Pope in town I was working from home. The thing I didn’t think of? The neighborhood is totally dominated by moms with strollers during the work day.

One bad run in with an inconsiderate mom later, I had a broken pair of glasses and scrapes and cuts on my face, my left palm, the back of my right hand, both knees and my right shoulder. 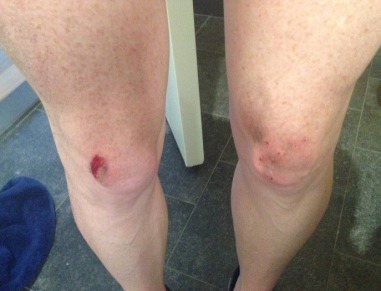 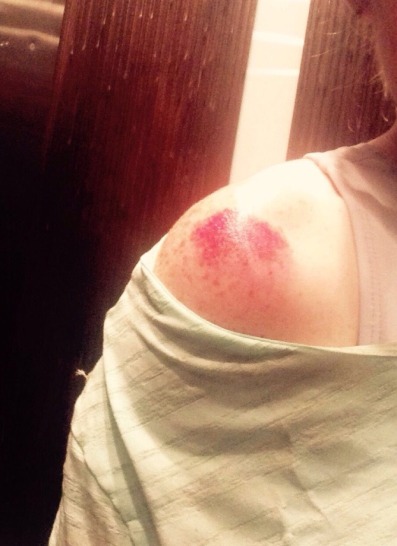 I now fully understand what it means to fall head first.

Despite the pain, I was able to knock out a strong 20 miler on Saturday. I was definitely feeling it, particularly in my shoulder, which took the brunt of the fall, but I wasn’t going to let that get in the way of my long run!

Without the recovery run on Sunday, I was able to get in some time out in my BF’s kayak on the Long Island Sound! It’s always fun to mix up the “cross training” 🙂

One thought on “Philly Training: Week 10”