Training for a marathon is a long, arduous process. It requires dedication and sacrifice, early mornings and discipline. For months, I put running before almost all else in order to put it all out on the line on race day.

It’s remarkable how 110 hours and 48 minutes of running over 16 weeks of training can all come down to a race that only lasts a few hours. After so many hours of training, I guess it probably shouldn’t be surprising how much a 3 hour and 16 minute race could break my heart.

I poured my heart into this training cycle and I was excited, and nervous, as I mentioned before, but I felt strong heading into race day. I believed that if nothing else, I could run a PR and feel good doing so. Mother Nature, however, had other plans.

Though it was my seventh marathon, it was my first time tackling that infamous course. I knew running my goal wouldn’t be easy, and I wasn’t sure I was entirely ready for it, but I certainly wasn’t prepared for what would become a blow up of epic proportions.

For context, here is what my previous marathon times and training schedules looked like:

*Not a goal race

I played it perfectly leading into the race. I tapered well, I ate well and I slept well in the days before the race. I woke up at 5:30 a.m. on Monday after a solid 7.5 hours of sleep. It was honestly the best night sleep I have ever gotten before a marathon.

I packed up loose ends into my suitcase (my fiancé would have to check out before leaving to spectate), and I was on my way. I don’t do caffeine before racing, so I just went to the buses with two bottles of water, a bagel, peanut butter and banana.

I ate a quarter of the bagel on the bus, because I was hungry, but I waited until 8 a.m. (two hours out from my starting time) in the Athletes’ Village to eat the rest. About 15 minutes before the start (as I was still waiting for the porta potty…the lines were crazy) I had 3 ShotBloks and a SaltStick since I knew it was warm. I also slathered on a ton of sunscreen. You know you’re a pale person when you bring your own sunscreen with you to the start corrals.

What I failed to do, however, was to check the weather race morning and to take into account that the weather in Hopkinton, the marathon start, wouldn’t necessarily be the same as in Boston, where the race would finish. As it turns out, while the high projection in Boston was 59 degrees, in Hopkinton and Framingham and other points west, the high projection was in the mid-70s.

As I was sitting in the Athletes’ Village, I thought it was in the mid-50s and that I was being a wimp. I should have known better, but hindsight is 20/20.

What I also failed to do was to develop a B-goal for the race. I went into it with sub-3 very firmly planted in my head. As such, even though I was warm—and already suffering from two hours in the direct sun before the start (ginger problems…)—I was sticking to it.

What surprised me from the beginning was just how crowded it was! I’ve never run a race with so many fast people, and as we were going downhill at the start, we got a great view of the curb-to-curb mass of humanity in front of us.

I succeeded in taking the first mile slow, as many people advised me to, but the crowd deserves more credit for that than I do. From the beginning, I started keeping a mental tally of seconds +/- goal time.

But I knew something was off from the beginning. The night before the race, I thought to myself, “I really should have put a blister pad in my shoes,” because I have a tendency to get blisters under the ball of my big toe on both feet. It was too late, however, to do anything about that.

Sure enough, only about two miles into the race I felt a blister forming on my left foot. In hindsight, I think the heat might have led to swollen feet, and that combined with some pretty steep downhill in the first mile led to the blister. All I could do was try my best to ignore it and keep my form consistent.

My focus in these miles was keeping pace and looking out for my fiancé, who was cheering in Framingham at about mile 6.5. It was hot, but I had continued to convince myself that it really wasn’t that hot. I told myself to suck it up, that I could do it. That it would turn out was the wrong approach.

As my fiancé was waiting in Framingham, he checked the weather: 71 degrees at 10:30 a.m. Ouch. I wouldn’t find that out until much later, though. That’s really hot when your warmest training run in the past four months was something like 50 degrees.

I heard this course was rolling, but how are there this many hills? At this point, I was not having fun. I was focused on my splits, and doing some mental negotiation around how long I could hold them. It was only the half way mark, but I knew this wasn’t going to be a good day. I didn’t feel this tired so soon I Philly, and I was feeling thirsty all the time.

I decided at this point to try to keep my pace as long as possible, but to walk the water stops to make sure I was getting enough fluids. Already my face was totally coated in crusty salt. I was sweating, but the moisture was evaporating pretty much instantly.

Shortly after the half marathon mark, I had to admit to myself that I wasn’t going to it my goal, and that I needed to back off my pace if I wanted to survive. I figured at the time that if I backed off I could at least eek out a small PR. In reality, it was already too late for that, but I didn’t want to admit that to myself at the time.

Plus, I think that deciding ditch my goal without a very clear B goal in sight was a bad move. It’s really hard to do math that far into a marathon when you are hot and tired. And it’s really hard to push when you don’t have a clear goal in mind. Add to that my decision to walk the water stops and I was on a slippery slope.

Somehow, though, I managed to look decently happy in this picture somewhere around mile 16: 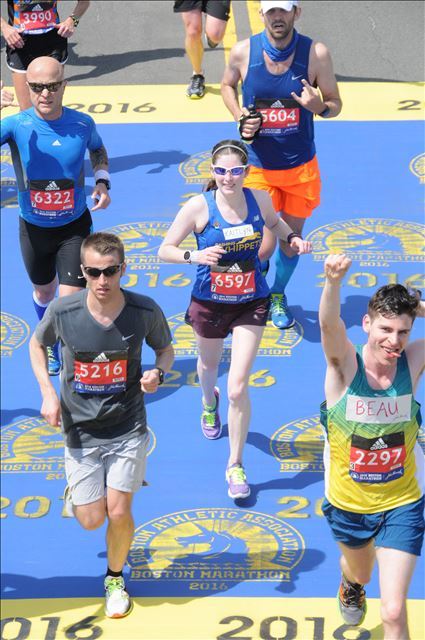 By this point I was suffering big time. As other Boston veterans had warned me, my quads were toast, even with the (relatively) conservative start, and the heat was doing a number on me.

At points I felt like I was going to vomit (but didn’t, thankfully) and I started to have issues with cramping. I was drinking a full cup of water or even two cups of water at every water stop, but it wasn’t enough. I was totally baking in the sun. I’m not sure if this is something unique to pale people, or if others feel this as well, but getting sunburned thoroughly exhausts me. In the end, I think the cramping was the result of a combination of the sunburn, general dehydration and an altered stride due to the previously mentioned blister.

The worst part though? I was having no fun. I love the city of Boston, and I was so much looking forward to this race, the crowds were incredible…but I just couldn’t take it in. All I could focus on was the mental battle with myself to maintain my forward momentum. Beyond that, I think I was just disappointed, and I didn’t want to face the crowds and their support since I felt like I was letting them—and myself—down. This race was far from the victory lap I was hoping for.

Mile 24 was my old stomping grounds, where I cheered when I was in college, and I just felt so disappointed that I couldn’t string together a full mile without walking, but the cramping was getting bad. I’d have some steps where either my left calf or my right quad would seize up and I felt like I would topple over. The only thing keeping me going was that I knew I’d see my fiancé at mile 25.

Shortly after the 25 mile mark, I stepped down and … pop. There goes that blister. It was searing pain. I felt like I was stepping on burning coals. But I had to be running when I saw my fiancé, so I kept going, only stopping when I got to him around mile 25.5 to give him a kiss (sorry, Wellesley girls). He was so enthusiastic and happy to see me that I knew I had to finish.

The cramping reared its ugly head again on Hereford St., and again on Boylston St. within sight of the finish. Nothing is more painful than needing to stop within sight of the finish line, but I seriously thought I’d fall over if I pushed through it and I didn’t want the medics taking me off the course before I could cross that finish line, so I waited a few seconds for it to pass and then run/hobbled as fast as I could over the mat.

Now that I’m a couple days removed from the race, I think my training was strong, but that my race day execution was flawed. I didn’t know how hot it was, and didn’t slow down accordingly. And my mental game was not on point. Going in with a single A goal , and nothing else, left me to crumble mentally when I knew I wasn’t going to hit that goal, and that’s something I need to keep in mind going forward.

All in, though, I know I should still be happy with how I did, but it’s hard.

As for some analysis, I was a top 500 female with an official time of just over 3:16. Last year, the woman with the same overall pace as me finished with a 3:11—a solid 5 minute difference, even though last year’s conditions also weren’t ideal. I think that says a lot.

Also, I beat my bib number by about 2,500 places, so that’s pretty huge. Boston bibs are assigned in order of qualifying time, so by beating my bib number, that means I beat a couple thousand people who had a faster qualifying time than I did. Granted, some of those people may not have even started the race, and I think there might be a gap of a hundred or so between the elite bib numbers and the beginning of Wave 1 Corral 1, but still, I beat my bib number by a big enough margin to be meaningful. (Silver linings…)

I think I need to take a little time off and get my head back in order after this race. This was my first time running a goal marathon and not running a PR, and that has really gotten to me. I was previously planning on running a fall marathon, but now I’m not so sure I want to.

If you follow this blog, you may have noticed I’ve run three races so far this year (a 10k, a half and now Boston) and I haven’t had fun in any of them. I want to rediscover the fun of racing.

I guess all I can do is put some distance between me and this race, and see how I feel. At the very least, I won’t be running again until my blister heals and some motivation returns. Next time I run, I want to run because I want to, not because my training plan says to.