All good things must come to an end, right? For me, that means the end of my 16-month streak of staying injury free.

Yesterday was my 9th day of no running due to an issue with my calf, right at the musculo-tendinous juncture where the Achilles’ tendon meets the base of the gastroc muscle. The cause? I got lazy. 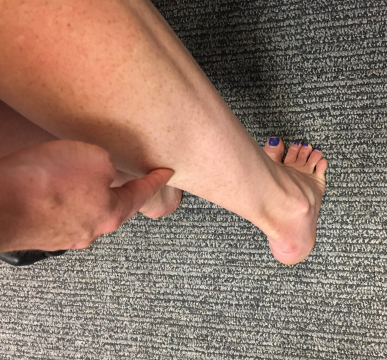 After the Boston Marathon, I was very clear that I lost motivation to run. That means I also lost the motivation to do all the little things that keep me healthy, as well, such as foam rolling and visiting my chiropractor for some Active Release Technique (ART) work.

When I finally started feeling motivated again, I really jumped back in. And given that I had shifted my focus to shorter distances and had gained some weight after Boston, I decided to supplement my running with Team Beachbody’s Insanity Max: 30. Turns out, that wasn’t the best idea for me.

I generally didn’t mind the videos. I liked working my muscles in new ways, and after about three weeks, I could really see more definition in my quads.

But each and every time I did the videos, my calves would become rock solid. Something about the jumping – particularly in the warm up portion of the videos, oddly enough – would just really tense up my calves. The problem with that is that it would carry over to my running.

Things weren’t great, but they were fine for the first three weeks. I did the videos 5 days a week and was running 5 days a week, with just three days of overlap. I was really getting into training, with some really great workouts, including a couple on my new track, with awesome views of New York City. 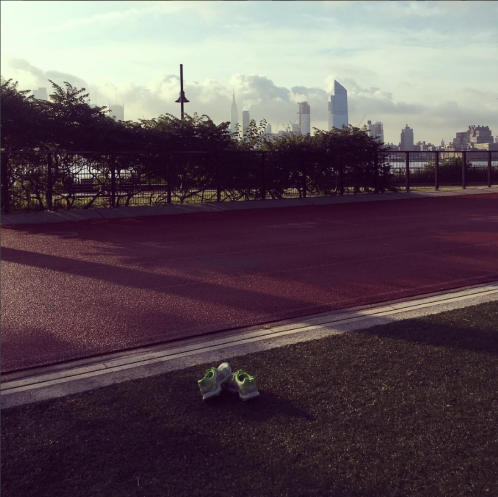 Then I went on vacation to Hermosa Beach just south of Los Angeles.I loved running in Hermosa Beach. I ran along the Strand, this miles long stretch of bike path along the beach, and the weather was perfect and the views beautiful. The problem is my calves were still tight, and my theory is that walking in the sand (I never ran in the sand) at the beach did them in.

When I got back from Hermosa Beach, I stopped doing the videos as I found my calves cramping up mid-run. After about four days home, it was bad enough that I had to stop multiple times during my long run to massage them out…only for them to immediately cramp back up after I started running again.

Then, after I got home, I felt pain just walking around. The pain was always as I was toeing off the ground, and always at that Achilles’ insertion point into the calf muscles. That’s when I knew I had to take some time off of running.

I researched the issue, and I still haven’t quite figured out what the problem is. It doesn’t seem to be a strain, because I never had any bruising or swelling, and there was never an “oh shit” moment when there might have been a significant tear. I also don’t have any weakness in the calf muscles.

I had two Grade III strains in November 2010 that were caused by blunt trauma, granted, rather than by running (I was doored while riding my bike on campus), so I do have a first-hand idea of what a strain might feel like, and I don’t think it was that.

The next major possibility was Achilles’ tendinopathy. However, after extensive research, I just don’t think it’s that, either. Despite my best efforts, I couldn’t find any information about Achilles’ tendinopathy impacting the top of the tendon. It seems it’s typically exclusively right above the heel, or at the insertion point into the heel.

One study said, “A third area involves injuries to the myotendinous junction, although these are far less frequent,” and then goes on not to mention that kind of injury again. Other studies only refer to that area of the leg to say it is a common site of ruptures, but that ruptures aren’t the point of the article. And I think I would know if I had a rupture.

My best guess, and my chiropractor agrees, is that I probably caused some microtears – but not a full-on strain – right around the calf/Achilles junction.

First, I obviously stopped running, beginning after my run on Monday morning. I stuck to the typical RICE routine—rest, ice, compression and elevation. Honestly, I didn’t elevate too much, but you get the idea.

Then, I went in for acupuncture on Thursday, which was great in releasing a lot of the built up knots and tension from the weeks of doing the plyo videos. On the following Monday (the earliest appointment I could get) I went in for ART. I have a follow up scheduled for tomorrow. ART really gets in there and helps break up any scar tissue that may have formed.

I have to say, I feel significantly better just 10 days later. I no longer feel any pain when walking, or when going up or down stairs. So this morning, I went for a 2 mile test run and it went pretty well! I felt a little tightness a little more than a mile in, but no pain like before. My walking has also been fine and pain free so far today, which is another good sign.

Tomorrow, I will try for three to four miles, and take a day off on Friday no matter how it feels, to keep things easy and gradual.

I only too nine days off, but I missed two races, both 5Ks. Mentally, that made doing the right thing very difficult. I was so looking forward to the races and testing my fitness, and instead, I feel like I’ve undone all my recent training.

Still, I had to remind myself every day that it was better to take a few days off now than to be forced into taking a few months off later. Maybe I could have run through this injury. Or maybe it would have turned into a full on strain.

I think all runners are addicts, of sorts. And I’m proud of myself to knowing when I need a break. I’m confident that two years ago I would have tried to run through the pain only to regret it later.

How do you know when to take time off? Has your approach to injuries changed over your running career?

12 thoughts on “When Injury Rears Its Ugly Head”